Over the past few months, we’ve been going back and forth trying to decide whether to do a separate review here, since we already did one for the smaller version of the One Touch Comfort.

What finally triggered us to review this one separately is the fact we’ve seen significant differences in terms of user satisfaction between the two beds.

We’re glad we did since it does deserve it as one of the more popular models from the the brand (see our main guide here –  Aerobed). 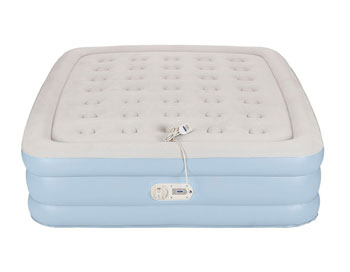 Main advantage of the One-Touch Comfort

This bed comes with many handy add-ons like the handheld wand, but that’s not what we want to address first.

We’ve been reviewing air mattresses for over three years now what our statistics tell us is that most people are primarily interested in the “substance” like comfort, safety and air retention.

While it is true that most modern airbeds do have to adhere to the strict guidelines set by the ASTM and are considered safe, the One-touch takes it one step further.

Here’s what we mean by that

The PVC is treated during the manufacturing process to make it more resistant to germs and odors.

This might be an important point for people suffering from allergies since the development of mildew or mold is practically a non-issue here.

The company has patented what they call a “stability base” in order to offer more support in their newer models.

What this means is that the bottom of the bed is reinforced both in terms of stability and the grip of the floor.

The former minimizes sideways movement and swaying in the latter prevents the bed from sliding. 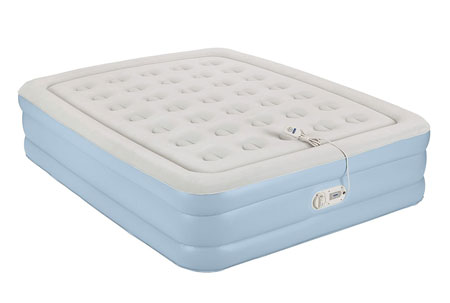 Apart from the extra sturdy base, this air bed features 35 air coils which is higher than 75% of similar models we reviewed.

It’s a well-known fact that the higher the number of coils, the better the bed will be at minimizing pressure points at the hips & shoulders and aligning your spine.

That’s what’s puts it in the top 15% in terms of toughness – you can see the complete list of most durable and heavy-duty air mattresses by clicking here.

Like most models in its price range, the One Touch Comfort comes with a one-piece pump that’s combined with an air-release mega valve. 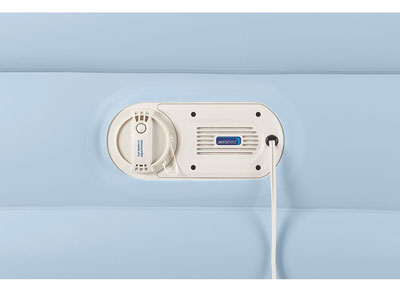 If we were only rating the efficiency of the pump and the time it takes to inflates and deflate the bed, we would probably see 5 or 6 models from the brand dominating.

While the industry standard is 3 to 4 minutes, this bed does it much faster by utilizing the mega valve (also known as Whoosh). 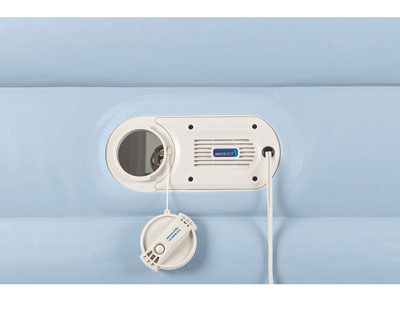 This is where you “it gets real” because we look at some of the downsides.

It’s not uncommon to see air loss issues in this price range; it’s only a question of the percentage in which they occur.

This % is higher in the One Touch than 25% of models we reviewed.

To be fair, the sample of data that we had to work with for our statistical model here was somewhat smaller, since the number of user experiences we could gather is lower than what we usually go with. 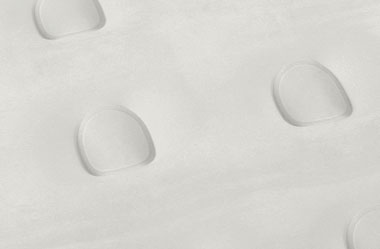 An exception to the rule

In fact, we were so eager to see how the One Touch fares against similar models that we made an exception to one of the rules we have.

We have a threshold of minimum data to collect before we do a review of an air mattress, but we made an exception for this one. In our defense, that threshold probably won’t be reached within the next year or so and we’ll make sure to revisit this review once that happens.

But let’s get back to the structural issues that you mentioned.

We’ve seen experiences of people reporting development of air leaks, most of them coming from the area surrounding the pump.

This usually happens in two scenarios – the more common one is a sub-par quality of connections and seams, but we don’t think that’s the case here.

In our opinion, the more likely scenario is that the construction of the pump is too robust for the thickness of the vinyl. If that’s the case, this bed is an exception because the quality of the vinyl is not an issue we commonly see with mattresses coming from the brand.

Again, we are stressing that this is just our opinion based on experience. We’ll be able to reach a more reliable conclusion once we get more information for the statistical analysis.

The bottom line is that we have seen no significant changes in the ratings in this update compared to the last 2 we did.

We are very interested to see what happens in the next update of this review.

The main reason for that are the differences we mentioned that the very beginning – between the two sizes that are supposed to be the same.

While we wait to collect more information for the updated review (that will probably take 10 months to a year) we will also try to contact both the company and the seller and see if they have comments.

It’s only fair to hear out their side of the story, especially because we are fond of classic brands.

It would be good for the market and, in turn, for the consumer to reinvigorate the competition between the new arrivals and products like this…coming from the industry giants.
As always, please do share your opinions and questions in the comments below or by contacting us directly.