B ack when we first started reviewing air mattresses (almost 6 years ago now), this Insta was one of the highest-rated models, especially in the air retention category.

The high ratings in air retention remain to date, but many things have changed since.

The shift in the industry started in 2013 with the arrival of some “young” products and introduction of new technologies and materials.

In this review, we’ll take a look at some of the advantages and downsides of this Insta and compare its current ratings to one of the members of the elite group of 10 top-rated air beds which you can see here. 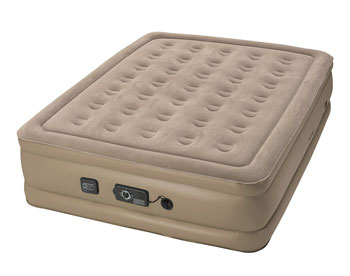 To put the whole conversation about the new arrivals into perspective, we’ll do a head-to-head comparison of the Insta Raised Never Flat Queen to a similar model coming from one of the younger companies – SoundAsleep. The other reason it makes sense is because Cloud Nine is the high-end model &Raisedd NeverFlat is the same for Insta-bed – you can see the full guide here.

The reason why we chose Cloud 9 for the mano-a-mano comparison is that the two models are in a similar price range and, more importantly, they both feature a “smart” pump. 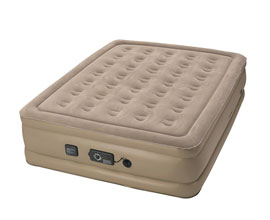 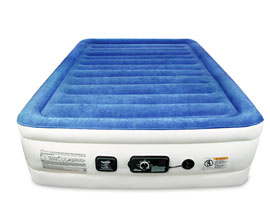 See the full review of the Cloud 9 here

Before we move on to a more in-depth analysis of the features, let’s take a look at some of the basic facts. The raised version of this Insta is a classic and there are no big surprises here.

We’re glad that the color choice between the brown and the gray seems to be here to stay. For a while there, the gray version was in and out of stock, so that’s a nice plus.

It’s available in Twin in Queen size; you can see the specs of the two below.

When we first reviewed this mattress, the only available color was Tan.

The company added more color options since, and the interesting part is that the pricing is different for the three colors and it comes in: gray, white and the traditional tan.

There’s no substantial difference between the three options in terms of quality. 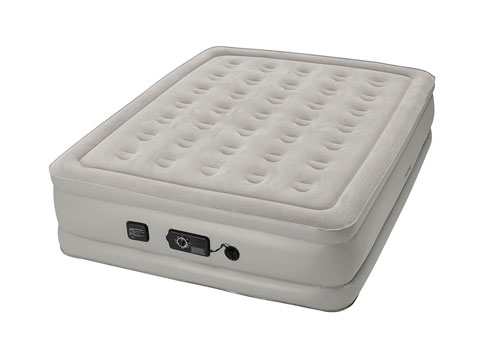 If there’s one feature the stands out about this airbed, it’s the Never Flat pump.

For those of you hearing the term for the first time, let’s take a moment to explain what it is.

The Never Flat pump system actually consists of two units – the main pump you use to inflate and deflate the bed and the secondary, smaller unit that keeps it inflated through the night by monitoring the pressure inside the chambers and adding air if it detects a loss of air.

This inflation system is probably the single biggest milestone the industry has seen in the last two decades…it’s a game changer.

Air mattresses are not on the outskirts of sleep industry anymore, they found their way into the mainstream, and one of the most important factors in the process was the technology of the smart pump.

It’s common sense because it’s air loss and deflation that people use to complain the most about.

The Cloud 9 air mattress that we mentioned above uses a very similar technology, but since the name NeverFlat is patented, they simply call the pump “smart.”

A Queen includes 35 coils, while the Twin size comes with 21.

We’re not breaking any new ground when we say that coils are superior to beams in terms of support and weight distribution. In today’s market, you only see the beamed design in the lower price ranges.

The vast majority of products from major brands are based on coils.

Each brand has a trademarked name for the support system – Coleman calls it ComfortStrong SoundAsleep refers to it as ComfortCoil and, with Insta, the coils are simply described as “circular.”

The idea behind the systems is the same – the coils are supposed to play the same role as the spring in regular mattresses.

What separates the brands is the number of coils used in their products and how sturdy the vinyl is.

The air mattresses that “pushed out” the Insta products out of our top 10 utilize some form of structural reinforcement for the PVC.

Two good examples of that are Fox Plush Durabeam and the Best Choice.

The former is simply made of 40% thicker PVC, and the latter combines nylon laminate layers to reinforce the vinyl.

The listed maximum capacity for the queen-size is 500 pounds, which is slightly lower than the 600 listed for some of the newer products.

Does it have to stay plugged in?

We’ve some confusion here, and it’s probably due to the Never Flat pump.

Keeping it plugged in at all times is optional, and you’ll want to do it to make full use of the secondary pump.

Apart from that, once the bed is inflated, you can unplug it just like you would any other air mattress. 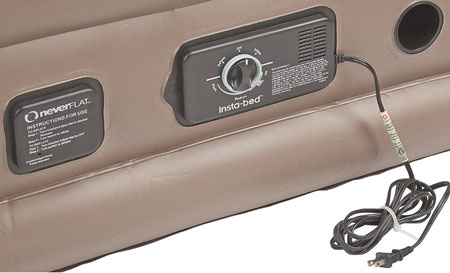 In the category of air retention, this bed belongs to the top 8% (according to our statistics) regardless of whether you use the Never Flat system or not.

You can choose your desired firmness, and if you keep it plugged in, it will be maintained through the night.

A small percentage of people (just over 2%, based on our data) reported that none of the presets is right for them.

If this happens, things get a bit tricky because the NeverFlat unit is designed to work with the presets.

If you feel like none of these is right for you, there’s a way around it. You can manually turn the switch on and off until you find your sweet spot.

The description of how the secondary unit works might lead you to the conclusion that you’ll hear some noise as it turns on and off through the night.

Let us put that’s concern to bed (pun intended) – the system is practically silent, and we can’t imagine it waking up anybody, even if you’re a very light sleeper.

As per our measurements, the box comes in is 3 x 8 x 6 “and the banks packs down to approximately the same size when deflated. This means that it won’t take much space in the trunk if you’re driving to the campsite. 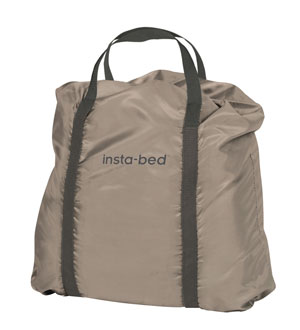 Do keep in mind that you need access to a power outlet to inflates it.

It also comes as a pillow-top.

Apart from the added layer of cotton attached to an elastic band (similar to that of a fitted sheet), there are no other differences between the regular and the pillow-top version. 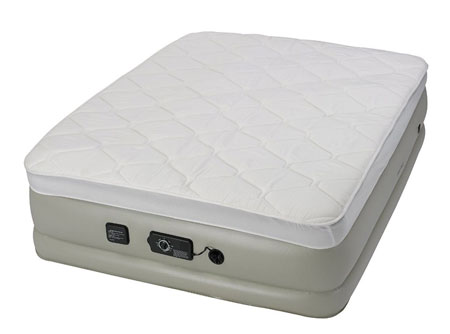 The pillow-top can make a difference for pet owners who want to protect the vinyl from claws.

It’s also very practical in terms of maintenance since it can be machine-washed and dried.

As a new owner you’re covered by a 12-month warranty on all structural defects of the material or pump.

It’s also worth mentioning that the package includes a patch kit and you can fix any pinholes that might to develop without buying additional sealants.

The monitor of the pump works with standard US power outlet and using it abroad or with a power source of different voltage (like 220 V) is only an option if you get an add-on inverter.

Summary of the review

The Insta Raised Never Flat is still a high-quality air bed and solid value for money.

It will be the choice of people who like the reliability of the smart pump and the classic appearance.

The fact that we haven’t seen it in our top 10 for a while doesn’t mean that the quality has somehow changed; it’s only a testament to the changing trends in the industry.

For the consumer, this can only be a good thing because it sparks up a race for your business and challenges classic brands like Insta to come up with a response to the changing market and improve their products.

Finally, feel free to reach out if you have questions and dilemmas that we haven’t addressed above.

We typically respond to all comments and emails within a day. 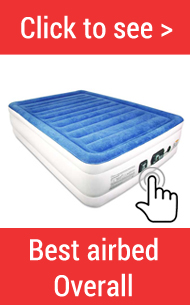