It is frustrating when an air mattress keeps deflating even when there is no visible hole.

The frustration gets worse when the slow leak in the air mattress won’t stop even when you thoroughly inspect it for holes and find none.

Let’s look into the 3 reasons that might be behind the misterious deflation. 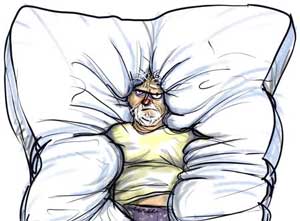 4 Reasons & what you can do

1. There is a pinhole that’s causing the deflation but it’s so small that you have the “no-hole” impression

2. The airbed is leaking from the area around the pump

3. The bed is placed in an area with significant temperature changes – this stretches the PVC of the airbed and changes the volume of the chambers. From your point of view, it seem like it’s deflating without being punctured.

4. Worst case scenario – you have a seam-leak on your hands

Placement of the airbed might be causing the leak

It’s not enough to pump your air mattress and use it, you must check the area it is placed to ensure that it is safe.

To stop your mattress from deflating, the space should be big enough for the mattress, and the surroundings should be kept clean so that sharp objects or small stones that could cause “invisible’ pinholes and slowly deflate the airbed.

These punctures can be so tiny you could miss them with ordinary eyes, but big enough to cause a slow leak in the air mattress.

The second tip is not placing your mattress in an area of a room with significant temperature fluctuations (eg. heaters). 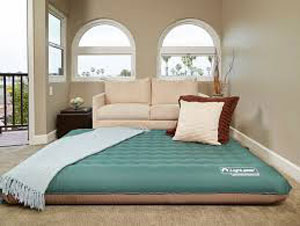 Give the Air Mattress Time to Stretch Out

When you pump a new air mattress, it usually appears sturdy and firm. As they start using the bed, most owners would find that the mattress sags a bit.

This slight sagging is because of the mattress stretching to accommodate the weights of the users. This stretching is normal, but it is more noticeable in some brands of air mattresses than some.

To control stretching, it better to pump the mattress, leave it be for a day or at least 8-10 hours and then add air to your desired firmness. 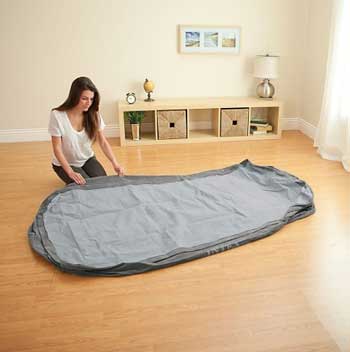 Temperature of the Room

The air mattress will change firmness whenever there is a significant change of temperature in the room. Just turning off your heater can be enough.

To check this, inflate your mattress fully hours before you go to bed, and when you are ready to sleep you can top up the lost air. You can, of course, use a heater in the room, but make sure it’s not close to your bed.

Ensure that you do not keep the heater too close to the bed to prevent your air mattress from deflating due to misterious leaks. 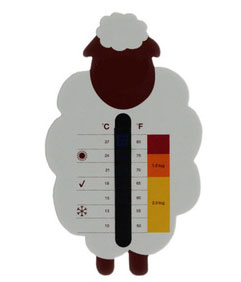 The “no-hole-deflation” can be caused by overloading

Manufacturers specify weight limits for all sizes of beds. This means that a twin sized bed and a Queen bed are not created to accommodate the same weight.

Do not over-exceed the maximum weight capacity of your bed. Also, it does not matter whether people are sleeping or sitting on the mattress, the air mattress will not develop a slow leak if the weight requirement is followed to the later. Overburdening is one of the common cause of “air mattress deflation and no hole” situation.

To stop the air mattress deflating, don’tt let kids bounce on it. This could cause wears and tears in the mattress. 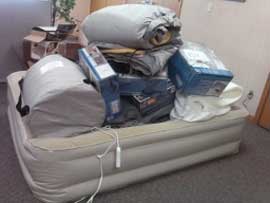 If nothing else works

When enough is enough

If you own an air mattress, there’s nothing worse than the frustration of finding the mysterious leak.

You spend hours spraying the thing with soap water looking for bubbles, toss it & turn it listening with an “open ear” hoping to hear the hissing sound.

To be blunt, more often than not it’s just not worth it because if the airbed is leaking and there’s no hole to be found, it’s very likely that what you’re dealing with is a seam leak.

Leaking at the seams is common and practically unsolvable

If it’s a seam leak, it might be time to look for a new air mattress. Here’s why…

Patching a pinhole might work, at least temporarily, but with seams, it’s probably not worth it.

Even if you do manage to locate the general area of the leak, the surface of the seams is simply not effective. 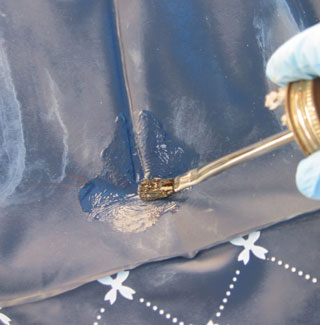 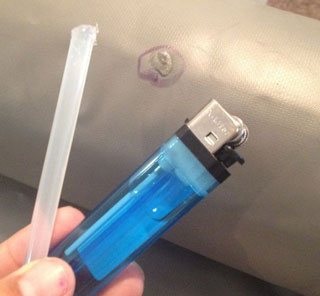 Do all airbeds leak?

At some point, it’s just too much frustration for a patch that will hold for a few days or a week. Think about the time and the nerves you’re investing and compare that to simply getting an air mattress that won’t leak.

Easier said than done, they can all leak, right?

Well, yes and no….that’s exactly why we’ve been doing some testing to pinpoint the models that are not prone to leaks. The list of top picks here is different than the ratings in our main guide on top-performing models.

The results that we’ve seen are staggering, some of the popular models have up to 500% bigger air leak incidence than our picks in the category of the “most durable and leak-proof”.

See the results and list of most durable, heavy-duty air mattresses here >>