Over the past few months we’ve received about two dozen of questions on the topic of choosing an air mattress frame.

We finally got some time to address the issue and give you some pointers on choosing right.

First things first, choose the type of frame you’re looking for (home or camping) by clicking one of the two buttons below. 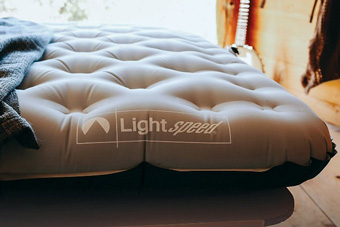 Click one of the buttons below to skip to frame type you’re looking for.

Frames for home use 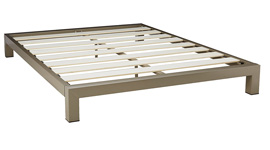 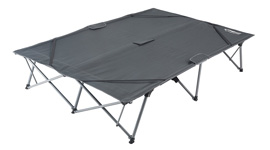 On another note, some inflatables are better suited for mounting on a frame than others, but more on that in a minute. Let us first take a look at our top picks.

If storage space is not a big deal for you, Stela is just right – it ticks all the boxes we mentioned above and more. It is also the most stylish frame that still meets our criteria.

The most important factor here are the wider and thicker slates with smooth top coating. The former will prevent the pressure points from forming and the later will minimize the risk of a piece of wood making a pinhole in your inflatable.

It comes in all the sizes you might need for an inflatable: Twin, Full, Queen and King.

It’s also the most stylish product on the list the beams are matte brushed gold or black, and will give your a space some extra pizzazz. 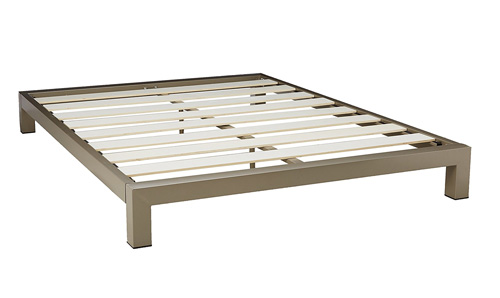 The Stella ticks all the boxes we mentioned for using it with an airbed.

It’s the most stylish deign among our top picks and has an impressive user satisfaction from hundreds of owners.

If you are OK with the low profile (9 inches), it’s the obvious choice.

See it on Amazon here

Frames with steel bars (instead of slats) are closer to each other which offers better weight distribution thus lowering the risk of pressure points.

Having said that, the bars are also not as broad as wooden slats and. The best practice with any base of this type is to use some kind of a protective layer between the top surface and the bed (ideally a piece of plywood, but a tarp or even cardboard can do the trick).

One of the best parts about the PragmaBed numbers  is the fact that they don’t require any tools to assemble they are designed to unfold and securely lock into place in under 10 minutes however the full security you might need a wrench and screwdriver for the nuts and bolts.

Although there are no sharp edges on the top, an air mattress is still made of vinyl and it can develop a leak with prolonged use. The best practice here is to use a piece of plywood or even cardboard as a protective layer between the top surface and the bottom of the air bed. 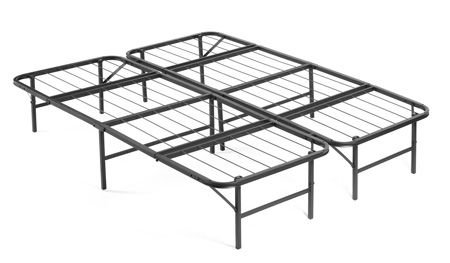 The steel bars of the PragmaBed are solid and close enough to offer proper support for an inflatable.

It is however, like with all metal frames, adviseable to use some kind of protective layer between the base and the inflatable.

If you want something a more stylish look, the DHP upholstered with metal sides and center beam might be your choice.

It comes with wooden slats. They’re not as wide and thick as those used for the Stella, but the good part is that they are secured into place on both ends using sturdy fabric. That adds stability to the structure and it protects the air beds from potential damage caused by the edges of the slats.

From what we’ve seen in user experiences with this platform it’s pretty easy to assemble. The company does offer expert assembly but it’s our opinion that it’s not really worth it because it costs more than the platform itself. It will work with most spaces because it comes in both white and black. 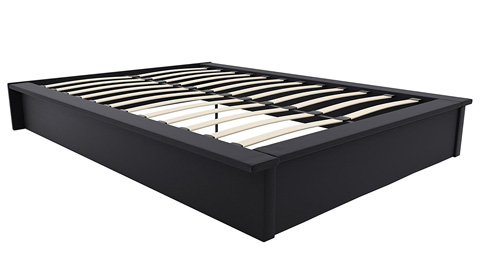 If you prefer this lock the good news is that despite in spite of the luxuries look this frame is actually pretty affordable.

The Zinus 14 inch smart base mattress foundations by far the most popular and most budget friendly. It comes in pretty much all sizes from narrow Twin to California King

There are 3 available styles: the standard, deluxe and, the one we would recommend for an airbed, the bed skirt style.

As we mentioned, with most frames we listed (apart from the Stella) you’d have to add some sort of a protective layer between the top surface and the airbed.

Assembly from what we’ve seen the assembly is pretty simple and most people don’t use to add the extra cost of expert assembly, especially having in mind and that the cost is much higher than the frame itself. The height of the frames 14 inches who to give us plenty of storage space. 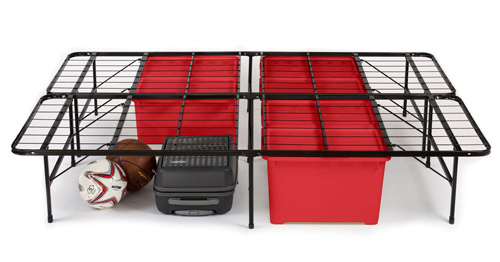 The skirt of this Zinus (not shown in the image) is not only a tasteful touch that covers the steel frame (which is not a joy to look at) but also lowers the risk of damaging your inflatable.

For camping purposes, there’s no better option than the frame that comes with the Coleman Cot airbed.

This frame is light, foldable, portable and packs small enough to fit into a trunk. On top of that, the airbed is included and it includes pull-out side tables with cup holders.

The whole structure packs into its own carry bag with wheels and sturdy handle.

The cover is slip-in, meaning that the inflatable bed is secured into place with a zipper but can be taken out and used separately.

Last but not least, the combo is a big money-saver. 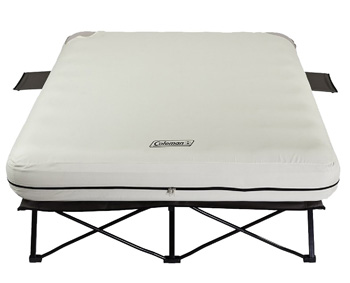 The KingCamp is a solid option if you prefer to use the bed you already own.
the oversized dimensions (84.6 x 55) will fit comfortably fit all bed sizes.

The thick, sturdy fabric (12000d Oxford) easily accomodates up to 550 lbs of weight.

Similar to the Coleman above, it packs into a wheeled carry bag that comes included. 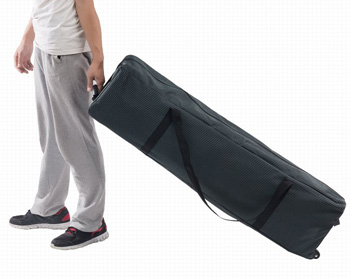 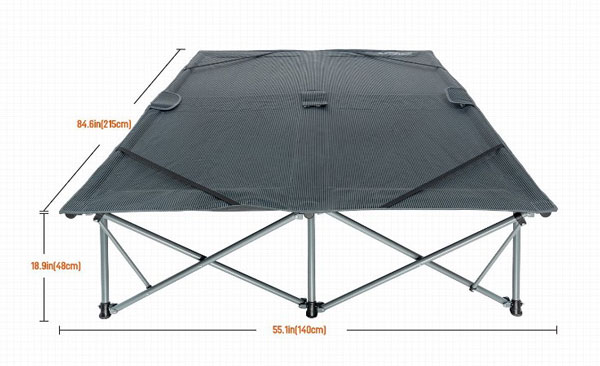 We’ve covered most the things to think about when choosing and air mattress bed frame. We might just add that, if you’re looking for a model that you’ll can carry on trips, you’ll want one that’s:

What kind of airbed works best mounted on a frame

This part of the guide will only be relevant for you if you are replacing your bed is an option or if you want to learn whether your existing inflatable is suitable.

There are two types of inflatables in terms of inner design – chambers and beams, and the former pairs with a frame much better.

If you own one with a beamed design and you plan is to use it with a metal-bar base, the risk of damage is lower if you choose a platform with bars that don’t “run” in the same direction as the bars. The bad news is that most of them do.

Most lower-end Intex airbeds have beams that run top to bottom, the same direction as the metal bases we looked at (image below). 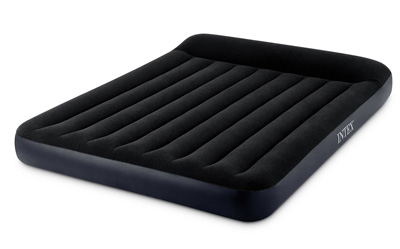 In this scenario, the bottom is more likely to protrude between the bars, thus putting extra stress on the inner seams and increasing the risk of one of the walls separating the beams will give in.

That risk is somewhat lowered if the beams are side-to-side, like in the Simply Sleeper 47-T (below). 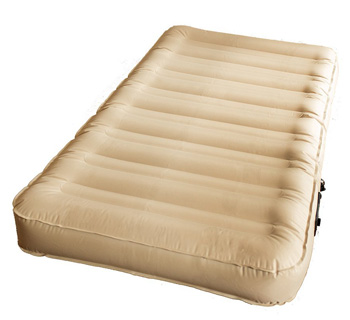 Whatever the case, if you’re working with beams and a metal base, it’s smart to have something in place that will stabilize the structure (like ply wood).

If the inflatable is chambered (like the Aerobed Classic below) they will distribute weight better and, lower the chances of the mattress protruding between the bars and, in turn, significantly decrease the likelihood of air leaks developing. 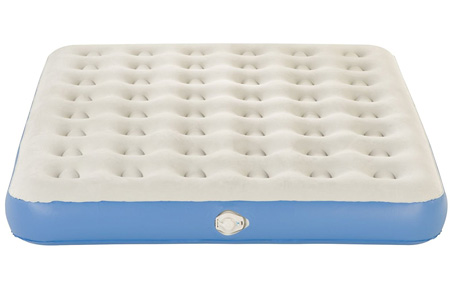 Airbeds that are most suitable for being mounted on a frame will meet these criteria:

The alternative – an airbed with its own frame

If you want the comfort of sleeping on airbed raised above the floor and don’t want to deal with frames, the simplest solution is getting one that comes with one of its own.

These models are called EZ beds and our top pick here is Insta EZ NeverFlat. 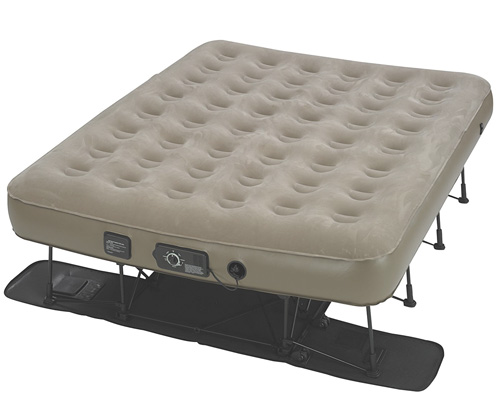 We did our best to cover all scenarios and make this guide as detailed as possible and, for most people who already own an airbed, it might seem overly complicated. So, let’s simplify the options you have.

If you reached this page, chances are that you are looking for a frame for the air mattress that’s in your home right now. If that’s the case, you can’t go wrong with the first frame we mentioned – the Stella.

It’s only frame with a sturdy construction that will feel like a regular mattress paired with an inflatable rather than feeling “wobbly” and sliding. So, if you don’t want to overthink it or hassle with adding plywood and whatnot, it’s our recommendation to go with the Stella frame.

For camping, the Coleman Cot & KingCamp have no real competition in all aspects that matter…weight, portability, comfort.